The Story of Historic Medora

The town of Medora was founded in April 1883 by a 24-year-old French nobleman, the Marquis de Mores. He named the town for his bride, the former Medora von Hoffman, daughter of a wealthy New York City banker.

The valley of the Little Missouri had been the scene of varied activity long before the arrival of the Marquis. Native Americans had hunted the area for many generations, an example later followed by early white explorers and frontiersmen. General Alfred Sully fought the Sioux in 1864 a few miles south of the present site of Medora, in what became known as “The Battle of the Badlands.” Lieutenant-Colonel George Custer passed through in 1876 on his fatal march west to the Little Bighorn.

A military camp known as Badlands Cantonment was established in 1879 on the west side of the river to protect surveying and construction crews of the Northern Pacific Railroad. A small settlement called Little Missouri then sprang up between the Cantonment and the river.

The Marquis de Mores arrived in the valley a few weeks after the abandonment of Badlands Cantonment in early 1883. With financial backing from his father-in-law, he founded the town of Medora east of the river, building a meat packing plant, a hotel, stores, and a large home (Chateau de Mores) overlooking his new town. The heavy influx of capital into Medora signaled the end of Little Missouri, with many Little Missouri businessmen moving east across the river to the new boom town. Despite the vision and energy of the Marquis, his various enterprises ended in financial failure by the fall of 1886. With their son and daughter, the Marquis and Marquise returned to France, where another son was to be born. The Marquis continued his visionary and adventurous lifestyle around the world until he was killed by native tribesmen on the Sahara Desert in Africa in June 1896. His widow Medora never remarried, and died in France in 1921.

Another colorful individual drawn to this area was a young New York politician named Theodore Roosevelt. He first arrived to hunt buffalo in September 1883, immediately fell in love with the land, and invested in cattle raising. He would eventually own two large ranches – the Maltese Cross, about seven miles south of Medora, and the Elkhorn, about 35 miles north of town. In 1901 Roosevelt, at age 42, became the youngest president in U.S. history, serving until 1909. He called his years in the badlands “the romance of my life,” and often credited his Dakota experiences with enabling him to become president.

Other notable individuals have also called Medora their home. The Eaton brothers began entertaining visitors at their Custer Trail Ranch about five miles south of Medora in 1883, and the first “dude ranch” in the United States was soon in full operation. Tom Mix, who became a great western movie star, married Miss Olive Stokes in Medora on January 10, 1909. James W. Foley, Jr., whose father was caretaker of the Chateau de Mores for many years, grew to manhood and taught school at Medora. It was here that he began writing poetry that would make him a nationally acclaimed literary figure and North Dakota’s Poet Laureate. By the time of his death in 1939, Foley had published more than a dozen volumes of poetry.

As the seat of Billings County, Medora continued to be an active community following its flamboyant early years. It has always been a cattle town, with countless thousands of cattle being shipped out over the years. From the 1920s to the 1940s, three large coal mines operated in the vicinity, and from 1934 to 1941 the Civilian Conservation Corps maintained a base camp near Medora. After much landscape and restoration work by the CCC, the 128-acre Chateau de Mores State Historic Site, including De Mores Memorial Park, was opened to the public on August 7, 1941. The modern Interpretive Center is open daily throughout the summer, with guided tours available through the refurbished 26-room Chateau. The CCC also built many roads, signs, and structures within what is now Theodore Roosevelt National Park, which was established on April 25, 1947, and encompasses some 110 square miles in its North and South Units. The Park and its modern Visitor Center are open all year, offering many interpretive programs, hiking and nature trails, and a 36-mile scenic drive through the South Unit. Roosevelt’s Maltese Cross ranch cabin now sits behind the Visitor Center.

In 1958, the theatrical production Ol’ Four Eyes, a dramatic retelling of Roosevelt’s life in the North Dakota Badlands, was initiated in the specially constructed Burning Hills Amphitheatre a mile west of Medora. The drama ran every summer until 1965, when the nationally renowned Medora Musical began production. This lively variety show is held every evening, typically from early June through a week after Labor Day.

In 1962, entrepreneur Harold Schafer and his Gold Seal Company began a restoration and modernization of the old western town, developing many additional attractions. Their efforts, now managed by the Theodore Roosevelt Medora Foundation, and the efforts of many independent business people, have helped make Medora one of the premier family entertainment destinations in the country. 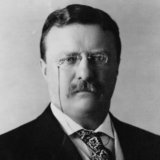 Now and then we hear the wilder voices of the wilderness, from animals that in the hours of darkness do not fear the neighborhood of man: the coyotes wail like dismal ventriloquists, or the silence may be broken by the snorting and stamping of a deer.